At 20:44—Office
... Lost at sea, she's rescued by a ship and wished she had never set foot on it....
N
othing new on this story. Nothing came to me while I was sleeping or when on my errands. I thought something would come about, but nope. So be it. 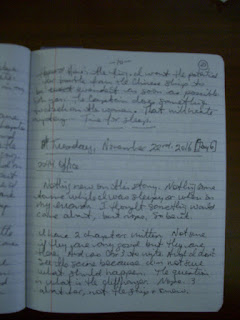 I have two chapters written. Not sure if they are any good but they are there. And so Chp. 3 to write. And I don’t see the scene because I’m not sure what should happen. The question is what is the cliffhanger. Nope. 3 about her, not the ship and crew.
And I’ve already written the last line of the chapter. She wakes up and feels immense pain. Not sure if I should mention blood in the water. This chapter or the following.
So it’s early dawn or not quite sunrise. And she’s in the cockpit unconscious. But how do I write it from her POV if she’s out. Hmmm. I can do it but should I do it? And I don’t want to go into her mind as a dream. I’m not going write about any type of dream. I don’t like them [in stories]. Too fanciful [weird, surreal] and a cheap trick. Keep it grounded in the real world. I know I can have her go in and out of consciousness. [That makes more sense.]
At 21:49
That went well. I wrote 5 pages for Chp 3. I had something to go with and went with it. In reading it I see the first part is summary hence a touch boring but it’s short. You can’t write everything as action. There’s going to be summary [somewhere at some point]. And I stayed in her POV. She was conscious but intermittent. In the chapter it was a period where she awakes but we end with her discovering she has a gashing [maybe I meant gash] on her head then blacks out.
What now for Chp 4? It’s the crew and ship. They don’t know she’s out there. (Quick note. I did enjoy writing the chapter. I was in the moment and felt better as a result. I think that’s a god thing. It’s encouraging as I want to keep writing. In fact I wanted to keep writing more of the chapter but I’m consciously [purposely] keeping them short. That’s the way I’m crafting this story. [And it departs significantly from my previous novels where chapter lengths varied from a few pages to tens of pages.]
Time for some food and I will continue.
At 01:30
I’m feeing mentally good at the moment, but also a bit exhausted. The was was some exercise. 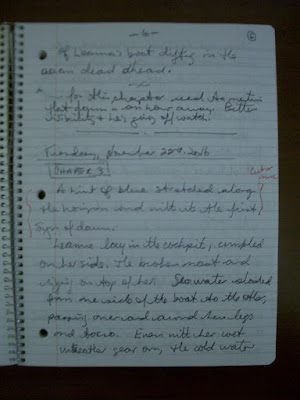