At 14:51—Office
... one needs the discipline to get things done and hence the first things first motto...
T
ime to work on my novel. Feeling some dread and trepidation. Not what I want to be feeling. Ugh and double ugh. It’s doubt about the story. Doubts that I can do it. Doubts that people will read it. And so on. All the usual things. Doubts that I should be even doing this.
At 16:12 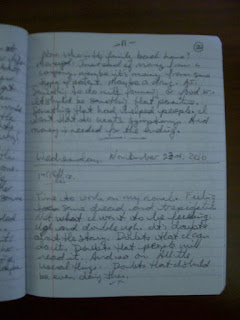 Sidetracked with a crossword and listening to a podcast. I think it’s my attempt at self sabotage. Certainly not a way to get this novel written. It doesn’t help that I can’t see Chp. 4. I don’t see the scene. I need to see the scene and I’m wondering where the hook is to start it. Lots of questions about this chapter… I could just start at some point and go to the end point, see what happens. That’s what I often do. But it doesn’t feel right. Something is missing.
[In the scene.] It’s morning. We’re on the ship. The focus is on the girl—nope I meant to write the Captain. Trying to think through the scene and I’m struggling. It’s pissing me off. Maybe I’m trying to force something that wasn’t there.
I had an image of the captain on a rampage. Storming through the ship to get something he wants. But it might be too soon. What if I write it from her POV. Hmmm. And where on the ship in this place where they keep the women. It has to be hidden. I know. They store diesel on board to power the engines. They have used one of the tanks. That’s possible. Or as I said, they use a series of containers that never leave the ship. It’s like a connection of different cottages. It might seem too obvious but…
[It turns out I allowed myself to get caught up in something tangentially related and didn’t get much done. This is where one needs the discipline to get things done and hence the first things first motto.]