... A former CIA officer searches for his missing business partner, a retired Secret Service Agent, only to discover a secret that leads to the White House....
W
hen a sniper's bullet hits Secret Service Agent Emerson Black, he saves the president's life, becomes a national hero and a paraplegic. Forced to retire, he starts a new career as a security consultant with Baird Carr, a former CIA officer. Their business is a success, but five years after the assassination attempt, events from Black’s career in the Secret Service surface and Black is missing. Everyone believes he left the country in search of a new life, taking with him millions in stolen money. Everyone except Baird Carr. 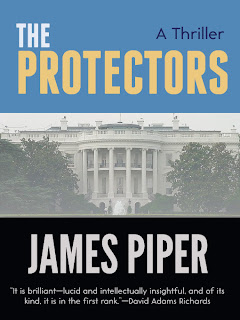 Searching for Black, searching for the money, Carr penetrates the world of offshore banking and discovers what happened to Black and why, but now Carr is the target. To save his life, he needs proof, but the evidence has been destroyed, witnesses silenced and the protectors have become the hunters.
The Protectors is the debut novel of James Piper. Filled with mystery, suspense, twists and thrills, he has brought his expertise in international finance to create a page-turner that will keep you reading until the last sentence.


Reviews
"It is brilliant—lucid and intellectually insightful, and of its kind, it is in the first rank."—David Adams Richards
"Ranks in my top 10 for this year."—Brian Mcpherson.
"Read it to the end and you will be surprised who is the mastermind behind the transfer of funds and who hired assassins. The last sentence is the shocker."—Nancy Silk.


Links
The book is available here: