At 15:53 Office
... This was a Chinese ship with Chinese officers. He didn't need some damn Dutch sailor to tell him how to run his ship....
Y
esterday was a day of distraction and writer’s block as I didn’t get too far. No new pages and nothing new on the story. Right now I’m stepping back to Tuesday, trying to get my mind around this story. Would it help if to read what I have. [Draft pages of the novel.]
____ 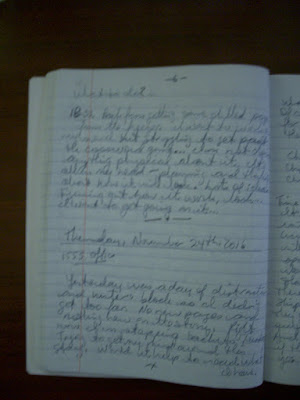 Later.
What I have is okay. It’s working. Of course it needs edits but that’s for another day. I think I worked out the broad strokes for Chps. 4, 5 & 6.


Time to brainstorm some ideas for Chp. 4. It’s dawn. People getting up for morning routine. There will be a change of watch. Cross checking containers… The captain will be getting up to start the day. He spent the night with *** [unknown name] *** – a young Malaysian woman of Chinese heritage. She’s a sex slave but that doesn’t come out directly. There’s 4 or 5 young women trapped on this ship. Most of the crew know about it because they use these women. [Writing about it, thinking about it revolts me and I question whether I should be writing this story. But you don’t write about it because you agree with it but because you want to point out the horrors. And as is my rule, I don’t write sex scenes. So no graphic details. Hint at it and let the reader’s imagination go to work.] But not everyone knows. Especially the second mate [actually first officer—I think].
And I had an insight. I was wondering if the ship’s owner knows about this. Probably yes. Part of the design. But it’s still hidden. In fact it’s below the superstructure. All the crews quarters and operation rooms are there. It’s like an apartment [or office] tower. As you go below deck, you get closer to the engine room. And tucked below deck, in what appears to be fresh water tanks, is compartments for the woman. Rooms. Washrooms. Living area. Laundry. So instead of a diesel tank, it’s water tank. And to get to it, you have to go through a recessed door in the the squash court. Or perhaps in the laundry room. Yes. I prefer that. I’m liking this [layout]. It’s making sense. Much more sense than I expected. And the entrance to this area is hidden. It has to be accessible. If someone searched the laundry room how would they not find the entrance. The metal floor has a cut out section that rises up by hydraulics inside. You need to punch a code into a box to get out. Otherwise you’re trapped inside.
And there’s a camera to see from below to the laundry room. Enter the code. Press a button. A red light flashes and crew in the laundry room move laundry carts. Once that’s done, the floor rises, persons comes out. Floor goes back down [the hatch] with another press of a button. This I like and there’s another door in the companion way that is locked before coming up to the floor [from the women’s prison or cage. It’s a water-tight like door.]
[I sketched out a an architectural drawing of the set-up. Side view and over view. Nothing I want to try to duplicate digitally.]
[The whole set-up seems a bit something, perhaps too fake, but to admit that would be to say, don’t write the novel. Hmmm.]
So. Chp. 4. He wakes up and goes up deck. Describe the situation and the layout and what is going on…he leaves the women trapped in this cage.
[Onto writing draft pages.]
____
At 18:40
Yes! I’m feeling it. Back on track. I wrote Chp. 4. 5 pages. It felt good. I was in the scene and I was in the zone. It was a much better result than I expected. [After typing up the draft pages, I see I have 540 words for this chapter. That’s two pages. Seems too short. I’ll have to add more details. Even add more action.]
I’ve downloaded a number of videos from Youtube on ships. Watch them. Notes. Get ideas. Ground the story in facts of the real world. 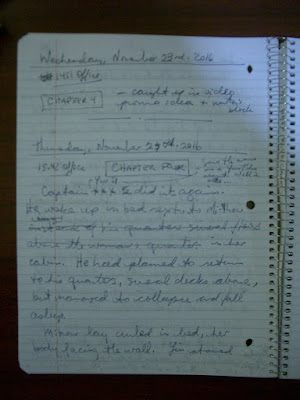 Now. Time to work on Chp. 5. I have a rough idea of what it’s about. It’s back home in New England. The parents of Leanne. It’s night time. Early. Say 21h because it’s 6h in the Western Indian Ocean [Work out the right time for the time zones later]. The mother has a tablet and is browsing the cruise of her daughter. Facebook. Web site. Reading comments posted. Maybe she replies. But the nerves kick in and she wonders why there isn’t a new video posted. Then discovers storm [system in the area]. [Could be too much of the stereotypical mother hen, but what else can I do?]
The husband, the dad, tries to reassure her everything is all right, but she has a bad feeling. Hence the wine and benzos [anti-anxiety meds, benzodiazepines]. That part is [such] a cliché.
She’s complaining about her tablet—can’t get it to work. Can’t view anything and goes to her husband to get it to work. Maybe he’s on a laptop and she’s sees something on the screen. Or he quickly closes it when she enters the room. I don’t want to let it play out as a typical husband and wife going to bed scene.
Here’s an idea. He’s in bed. Has his laptop up—online chatting—maybe a mistress. They have separate bedrooms. So intrigue about who he was talking with etc. And the wife enters to ask about the tablet. I was thinking she’s the one with the fortune and he’s a prof. Twist it up.
Leanne is 27. Her parents were 30 when she was born so now 57 give or take. Still “working” but close to retirement. Not sure where their money came from.
[Clearly don’t have much details on any of these three characters.]