...Jerry Lewis plays it up for laughs...

nother Jerry Lewis comedy where he stars and gets the bulk of the screen time, but for whatever reason, he didn't direct it like many of his other films. 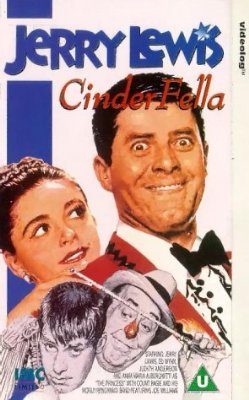 The story line doesn't matter, but based on the title, it's not hard to figure out. Take the story of Cinderella and have three brothers instead of sisters. Lewis plays Fella whose father died and left his vast estate to his stepmother played by Judith Anderson. Yes, the same woman from Rebecca. She's much older, but perfectly cast for the role as evil stepmother and you can't help but recognize her.

There is a beautiful Princess Charming, but she doesn't appear on screen that much. Nothing comic about her I suppose.

Like in his other films, the story is put together in order for Lewis to be silly. There are pratfalls and gags. He's a humble person with no ambition, dumb, does what people tell them, cleaning and doing household chores--lots of chances for gags.

There are a few funny moments, but a film like this is probably best seen with a large group and some mind altering drug.