...just thinking about this film brings a smile to my face...

f you're like me, you've seen a great number of movies over the years. Many of them are forgettable, but occasionally there's a movie that for whatever sticks in your mind. VICTOR VICTORIA is one of those movies for me. I must have seen it sometime in the 1980s and a second time probably one rainy Sunday afternoon. I remembered I loved the movie, but more importantly many specific details from the movie stuck in my mind. Lines of dialogue. Specific scenes. Robert Preston's performance. 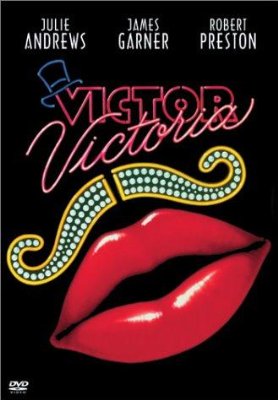 I watched it again tonight and I probably love it more than the other times. It's perfectly cast with wonderful performances, a great story, wonderful music, incredible costumes and sets for the 1930s. There's all that plus Blake Edwards's quirky comedic moments sprinkled throughout the film.

The movie is a musical and comedy, but more significantly a romance and the romance works.

Julie Andrews plays Victoria Grant, a singer in Paris in 1934. She's so hard up for money she licks the food off someone's napkin. Her luck changes when she meets a cabaret performer played by Robert Preston. In a moment of insight, he realizes the answer to her problems. If she can't make it as a female performer, she can pretend to be a man who does female impersonations. TOOTSIE used the same premise but instead of singing, Hoffman was an actor. (Odd both films were released in 1982. I wonder what was going on).

It doesn't take long for Victor to become a smash hit and as a man she meets James Garner and falls in love. What follows is the struggle to realize that love.

And will I watch it again? Yes. On some rainy Sunday afternoon. Just thinking about the film brings a smile.