love the setup to this film.

Samuel L. Jackson plays Tom, a retired cop ,who runs a cleaning company, but not a typical cleaning company. His firm cleans up when someone dies whether it's murder, accident, suicide. Not the sort of job I would even contemplate, but someone has to do it.

Tom gets a new assignment. There has been a murder in a mansion. When he arrives, no one is there, but there are signs the police have finished their investigation and after all he received the new job from the police. When he enters the house, the corpse is gone, but signs of a bloody murder cover the living room and he gets to work cleaning it up. 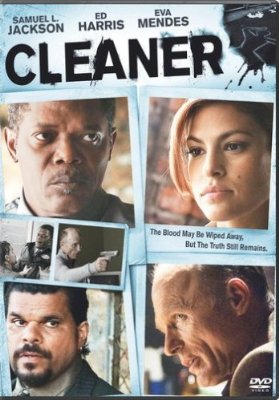 A day later, he learns someone set him up. Framed him. There was a murder, the blood was real, but the police hadn't started their investigation because they didn't know there was a murder. He cleaned up a murder scene before they could investigate. To make matters worse, evidence suggests he has motive and opportunity to kill the victim. He's up shits creek.

The filmmakers want us to believe the motivation for this frame-up is police corruption. The murder victim was a bag man for police payoffs and was going to testify in court. Kill him and the corruption charges go away. Frame our hero and the murderer is free.

It makes sense, but we meet Tom's former police partner, Eddie Lorenz. Their relationship is stormy. Tom left the force because he was involved in police corruption--taking money, working outside the law on criminals. At first Tom doesn't want to tell Eddie what happened on the mansion, but gives in when Eddie confronts him with forensic evidence industrial cleaners were at work. The two work on solving this riddle and keep Tom from going to jail for a murder he didn't commit.

But to get to Act III, the landscape has to change. The possibilities include Tom losing his get-out-of-jail free card (evidence of his innocence), he's arrested, daughter kidnapped. (That reminds me, why didn't he go to the DA who isn't involved in corruption, or did I miss something? Oh, well.)

Then there's the other possibility. His friend, ex-partner, was behind it all. You don't need to see it unfold to know it. The clues are in place before we get to the reveal.

First, if some corrupt cop wanted Tom in jail, framed as it were, they'd be following his every move until they could make the arrest. No one was tailing him. Why? Because Lorenz was with Tom and knew Tom's every move and every bit of evidence Tom had.

Second, Lorenz isn't the cop assigned to the murder case, yet he is intimate with all the details of the case. If the investigating cops were dirty, they wouldn't be telling him what he learnt. They wouldn't share that information.

Finally, we never see the detectives except when dealing with Tom. The movie keeps its focus on Tom the whole time. The POV doesn't shift away from him.

Finally, finally, Vargas is so one-sided--mean and vicious, that it's over-the-top. If you really wanted to keep us guessing, tone it down. Add subtly.

Given the premise the filmmakers were working with, they could have gone in so many other directions. Personally, I wanted to learn more about cleaning up the bodies.

There's a pat-the-dog scene early in the film. Tom, as boss in his office, meets with one employee who came to him troubled because he can't handle the work. It's too distressing and he wants to quit. Our hero shows compassion, won't let him quit and gives him other assignments. Pat the dog.

To show our hero is fastidious, he arrives home after work and promptly hangs his set of keys on a hook near the door. There are three hooks. He uses the one with his name under it. When he puts his shoes in the closet, there is a rack where Tom lines them up like soldiers on parade. Everything has it place. It's neat and tidy. Fastidious. I guess that's why he's a cleaner.