he question isn't: is this good or bad film? The question to answer is: why is this a bad film? It struck me very early in watching it, that I wasn't going to have fun watching this film and I didn't.

There are two elements to consider. The dialogue and plot. 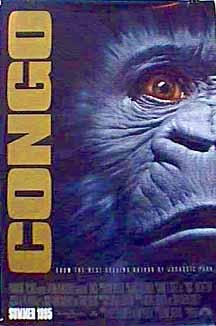 On the plot, it's paint by numbers. Because three diverse groups have to hook up as one to make a trek from the US to the darkest part of Central Africa, the story creates these ridiculous scenes. Does Dr. Ross really have to plead to get onboard a charter flight leaving the US? No, but the film wants them together and so that's what happens. That's just one of many examples.

The ending makes no sense. The climax happens well before the end and they escape in a hot air balloon!

So much of the story makes no sense, isn't the least bit believable and truly ridiculous. It's painful to think about it.

Then there is the dialogue. It's filled with boring exposition. In an attempt to liven it up, melodramatic conflict is added. Errrrr!

One bright spot was Joe Pantoliano's small role as a hustler at the airport. Too bad he didn't have a larger role.

I still haven't answered my question. Why is CONGO a bad film? It's based on a book by Michael Crichton. That's a good start. The screenplay is credited to John Patrick Shanley. He's a top notch playwright and screenwriter, but I suspect his strengths aren't with action-adventure movies and it's difficult to know how much of what he wrote ended up in the screen. How much did the producers, director, studio execs and actors change or have changed?

Here's the other twist. There are lots of special effects movies and action-adventure movies with weak dialogue and ridiculous plots, but there's a certain level of entertainment in them that make them enjoyable--not great films, but enjoyable. CONGO is neither.

At this point, I'm only guessing at why it's such a bad movie. Too many characters with hero potential. Stick to one. Perhaps. No clear objective--at least one that's worthy of being in a film. The story should have been designed better with a clear focus on Dr. Ross.

I can't pinpoint it and maybe that's it. There are many wrong elements in this film, not just one.

The other question: how did this script get made? I can understand wanting to make a film based on Crichton's book, but why this version?

Thursday, May 14, 2009 Bedtime Stories. Feature film. (2008, 99 mins) IMDB...a tame comedy that results in few laughs... There's the young Adam Sandler as a boy living with his sister in a small hotel in LA. His father owns and operates it. Sandler helps out. The dream of father and son is for the son to take over some day except there's a problem. The father isn't a very good manager and the place isn't making enough money. Enter the villain to buy it off him. The villain being a Mr. Hilton type who is able to turn lead into gold. Fast forward twenty years or so. The hotel is a large, thriving business, but for Sandler, instead of owning it or even managing it, he's the custodian who repairs broken dishwashers and replaces burnt-out light bulbs. The promise by the villain to put him in charge was either forgotten or ignored. Enter his estranged sister. She's a health freak with two young children. The father left a long time ago. Part of the humour…
Post a Comment
Read more

Tuesday, June 2, 2009 Once Upon a Time in Mexico. Feature film. (2003, 102 mins) IMDB...do you like lots of gunfire?... The guitar player is back at it. This time there's no mistaken identity. He's wanted by the CIA to help with a coup or to stop a coup. It's never very clear to me, but it doesn't matter. The plot is oh so involved with many players. There's the president and his back-stabbing advisor. There's the CIA. The FBI. The drug cartel and fractions within it. There's also the Mexican army and a certain General. And of course there's El Mariachi and his men. The plot doesn't matter. It's an excuse to put action sequences on screen. In this case it's scenes where our hero is attacked and out numbered and he has to shot his way out of every situation. Bullets fly like rice on a wedding day. It's guns and guns and more guns. The most interesting aspect of this film? The making of it. Many of the things done on scree…
Post a Comment
Read more