In I AM LEGEND, we see the future. The future where a measles virus has been genetically engineered to cure cancer. Known as the KRIPPIN VIRSUS, or KV for short, it cures cancer, and it mutates killing 90% of the world's population. It's the biggest pandemic ever.

What happens to the other 10% of the population? 1% are immune. They don't die from the virus, nor do they mutate into dark-seekers, haemocytes. The other 9% do. These haemocytes kill, eat the remaining humans. 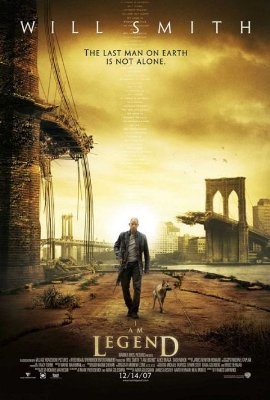 Our hero, our legend, played by Will Smith is part of that 1% that lives. How he survives while others died is part of the story.

It's three years after the outbreak. Manhattan has been deserted. Deer run wild. Buildings have crumbled. Plants grow everywhere including the cracks in the streets. To create such illusions the filmmakers relied almost entirely on CGI, but there are scenes that appear to be backlots or even on location, dressed to looked ruined. (The filmmakers failed in one aspect. Manhattan is built on a swamp and surrounded by water. Without humans, pumps that keep water out of the city would fail and thus major sections of the city would be flooded.)

Our hero has the city to himself. He and his dog, a German Sheppard named Sam, search for food and other people, he broadcasts a daily radio transmission and waits, but when sunset comes they hurry home to a fortress designed to keep the dark-seekers out.

The bulk of the movie focuses on these two characters to explain what happened, where they are now, what life is like now. What it's like is not something you'd want to live with.

Since our hero has no companionship, he treats his dog as if it were a child. Eat your vegetables, he tells her. He gives her a bath before going to bed.

The dark-seekers are hairless humans or rats or dogs infected with the virus. They have no ability to tolerate UV rays and must stay inside during the day. This quirk in their make-up provides a means for our hero to move about during the day but poses threats at night and does.

The dark-seekers are vicious, rabid animals. They have two responses: to attack until killed or flee because of the UV rays. They are a formidable menace.

Part of the backstory is told in flashback. Every time our hero sleeps, the flashback continues to fill in what has got us and him to this point. The key elements: his wife and young child died trying to escape Manhattan and he was a colonel in the US Army. A trained medical professional involved in developing and now controlling this virus.

He's still looking for a cure. His basement is a full-scale lab with dark-seeker rats. I've seen rats and you don't want to meet these rats even when caged. But on this day, he appears to have found a cure. One of the rats seems to be behaving normally. He'll only know if he starts human trials. That means capturing a human dark-seeker and bringing it back to his lab. He literally sets a trap to grab one. By the end of the film, he has a anti-virus, a cure. There is hope for civilization. But what civilization? Who is left?

Late in the second act, he and his dog are out on patrol when, with the sun setting, they are surrounded by dark-seekers. The dog acts as a bodyguard fighting them off, but is mauled in the process and infected with the virus. Our hero tries to save him, fails and must kill the dog. His response is reckless, suicidal behaviour. He attacks the dark-seekers and is caught in a trap they set. He's surely going to die but doesn't when a woman rescues him. She is immune and responded to his radio broadcasts. She's her rescuer, but in doing so she lead the dark-seekers to his house. When night arrives, they arrive and attack begins. Here's the finally battle. A long action sequence with growing levels of doom.

That anyone survived is a miracle, that our hero died saving her and the young boy she rescued is the reason he's a legend.

I find it interesting to imagine these scenarios because there is a chance they could happen. A pandemic could wipe out billions. The loss of cheap oil could have devastating effects on civilization. Global warming. Meteors. Just to name a few.