...a Hollywood romance with swords thrown in...

he title is extremely misleading. The film is not about the crusades but a love story set in the midst of a crusade led by King Richard.

Richard never spoke English and barely even lived on the British isles. He was a Norman who spoke French, but you wouldn't know that from this film. 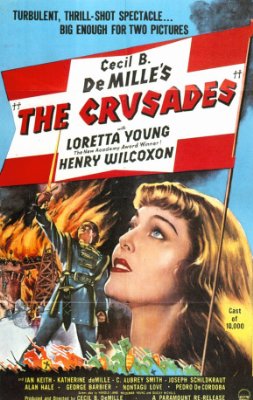 The filmmakers also want you to believe the King would have been caught up in something as trivial as love. Not a chance. Marriage wasn't about love. It was about matters of state, about power, and with that power, wealth.

A true-to-history film about King Richard and the Crusades would lack romance and therefore wouldn't appeal to a broad audience.

What we have in this film is nothing more than a love story. Richard is betrothed to Alice, the sister of King Philip of France. He doesn't want to marry her. He decides to go on the crusade because there's a chance he'll die and therefore not have to marry Alice.

In Marseille, he negotiates with a local King for food. Richard will marry the king's daughter in exchange for cattle and grain. Richard doesn't attend the wedding--he sends his sword instead. The oddest wedding ceremony I've ever seen. His wife to be is the gorgeous Loretta Young. She despises his boorish behaviour. He can't even bother to meet her, but when he does meet her, it's love at first sight.

Once in the Holy Lands, the battles against the Arabs begin, but oddly we don't see very much of it. The camera is held in close, never back to give a wide shot. I can guess at the reason--money. To film it otherwise would have cost a great deal more. As a result, the film doesn't have the feel we're used to when battles are shown. DeMille would make up for it in his later films.

THE CRUSADES is not a great film. It's mildly interesting with a completely absurd Hollywood romance narrative. I expected a great deal more from this film.