reston Sturges created THE PALM BEACH STORY during the height of his career as a Hollywood writer and director. Some draw similarities between him and Chaplin. Hitting their heights at a young age only to vanish from the scene. It was fun while it lasted.

A Preston Sturges's film is filmed with any number of devices to create comedy and laughs. Satire one moment, pratfalls and slapstick the next. He wasn't afraid or embarrassed about using any of it, provided it got a laugh and it usually did. 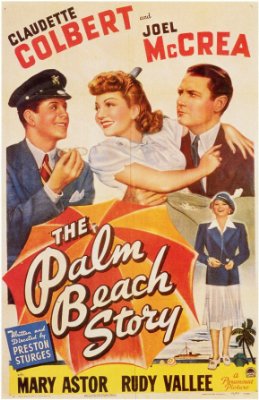 The story concerns a time when divorces weren't as common or as a easy as they are today. There are many real-life and fabricated stories about a wife moving to Reno to wait around until the divorce came through. In this film, instead of Reno, Claudette Colbert heads to Palm Springs for the same reason. It doesn't hurt that Palm Springs, Florida is known as a magnet for rich people.

But why a divorce? At the start of the film she marries Joel McCrea and life should be perfect except it isn't. He's a dreamer and idealist. He has plenty of ideas for projects, but they don't bring in any money. She feels she's not a good wife to him (can't cook, can't sew) and therefore a burden to him, a financial burden. She tells him he'll be better off when she's gone. He doesn't accept it because he's in love with her, but she won't change her mind. In a flash and with no money, she packs her bags. She talks a cabbie into giving her a ride to the train station for free, and once there, a group of men to let her onto their private train car for the ride to Florida. McCrea follows, but a policeman stops him. She's gone and he's dejected.

Through unusual circumstances, he receives money for a plane ticket. He flies off to meet her in Florida.

During her trip she meets a bookish, nerdy man who seems to like her. She accepts his charity for food and clothing because she has neither. He's latched onto her and takes her shopping--a shopping trip women dream about. He spends thousands on clothing, shoes, suitcases, jewels. And he's no ordinary person. He's John D. Hackensacker, III--one of the richest men in the world. She's hit pay dirt and he might have found a woman he could marry.

In Act III, they all arrive in Palm Beach. Mr. Moneybags and Colbert, his sister arrives, played by Mary Astor, and McCrea catches up with his wife but is introduced as her brother.

The sister has the hots for McCrae.

The four forces are working to completely pull apart the marriage until Colbert gives in. She does love her husband and no longer wants a divorce. It doesn't matter what may come.

One of the best scenes happens on the private train car where this group of men, duck hunters, have drunk themselves silly. One is sitting on a chair with a shotgun pretending to hit a cracker flying through the air. The man next to him doubts he hit the cracker. The bet is on. The second man pulls out his shotgun, loads it with two shells, asks the coloured barman to toss some crackers and starts firing. It continues from there until the entire car is shot up. Ridiculous for sure, but it's believable and damn funny.