our young women in their early twenties have a special pair of pants they share during the summer. Even though the four are different sizes, the pair of pants fits them perfectly and while wearing them, they experience miracles. That was the premise of the first movie (though they were younger) and it's the jumping off point for this movie. 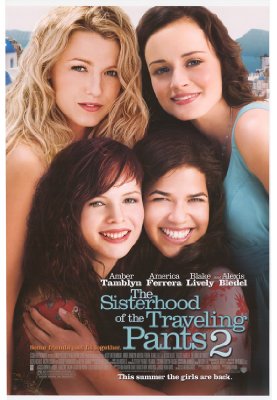 The women have finished school for the year and return home to spend the summer together, but it doesn't work out as planned. They are going on their summer adventures. Each will take turns wearing the pants.

Lena goes to a art school to study drawing. Her first encounter with a nude model tests her nerves. Later they meet and date and appear to hit it off, but there's someone else. Kostas. She met him in Greece during her visit in the first movie. The complications of young love continue in the second film. The movie explores Lena's relationships with these two men. Who will she end up with?

Libby stays in New York City to work on her screenplay--a romantic comedy. She has a day job in a video store. And there is Brian. Her boyfriend. The first time they have sex, the condom breaks. Terrified she might be pregnant, the relationship is ruined. She doesn't know how to talk to him while he tries. (The men in this movie, the love interests to the women, seem like woman in male bodies. It's one of the few weaknesses of this film.)

Carmen is studying theatre at Yale and gets a chance to work in a summer theatre in Vermont. Her mother is pregnant. Her best friend at Yale is Julia--a ditzy, attractive blonde who aspires to be a famous actor. They room together in Vermont, but the friendship turns dark. Julia's family rivals the Barrymores and Regraves. While I say Carmen studies theatre, it is not to be an actor. It's theatre production. Imagine Julia's surprise when Carmen gets the part of Perdita in A WINTER'S TALE while Juila gets a one-line part. Ouch. Scratch.

The fourth woman is Bridget. She's the athletic blonde who goes to Turkey on a dig, but something from her past is haunting her. Her mother's death. In an attempt to get answers, she travels to Alabama to reunite with her estranged grandmother.

While all these adventures happen in Act I and II, the pants travel from one to the other, but no miracles are happening. It's more the opposite. The pants bring turmoil and bitterness. Ignored by Lena, her younger sister takes them with her to Greece where she loses them. Act III begins.

Lena travels to Greece to find the pants. Not long after, the other three show up. The attempt to find the pants brings them together. It also gives the three a chance to fabricate a meeting with Lena and Kostas. To bring them back together. You can watch the movie to find out what happens.

I never tire of those amazing shots of Greece. It's absolutely incredible. If you grew up there, why would you want to leave?

While the story is slow to start and there are plot points we've seen over and over, I eventually did find myself caught up in the story of these four women and the gigantic cast that surrounds them.

It is engaging, funny, sweet, poignant and many other things. It is worth watching. The two male love interests (Leo and Brian) bring it down because they are simply gorgeous bodies without any personalities, but I suppose for a movie geared towards girls (not women), that's what the filmmakers wanted.

I laughed out loud at one great moment. Lena is at her grandmother's home in Greece. She is drawing a LOST & REWARD poster for the pants. She asks Yia Yia, her Greek grrandmother, how to spell 'lost pants' in Greek. Yia Yia curses in Greek and says, "A Greek girl never loses her pants." Love it.

I noticed one glaring goof in the film. The marquis on the theatre reads: Village Theatre Arts. Later a poster inside shows the ER spelling. It's common to see the RE spelling in the US when it applies to the stage.

Finally, I read Ebert's review where he says there won't be a sequel because the pants were lost and never found. I can't believe he would say that. Of course there could be a sequel wherein the whole first act is the triumph of finding the pants--just go to the wardrobe trailer.

I have no trouble with this title even if some thinks it's long. The worst title is a while: INDIANA JONES AND THE KINGDOM OF THE CRYSTAL SKULL. That's a mouthful.