watched this movie once before, probably in the mid-1990s, and it stuck with me--at least the film as a whole and certain aspects of the film. I know I enjoyed it then and I enjoyed it again.

If you were to break the film up into three acts it would be as follows. Act I deals with the young, unknown Chaplin growing up in England. Act II deals with his move to the US and his fame and fortune. The women in his life. The trouble with the FBI and Hoover. Act III deals with his exile to Switzerland when he couldn't return to the US. Hey, they thought he was a communist and a jew. 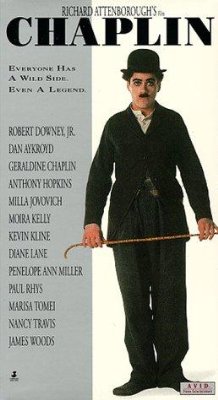 It climaxes with his appearance at the Academy Awards in the early 1970s. Titles at the end tells he died at age 88 and was knighted by Queen Elizabeth.

That's the overall structure of the film and it's ambitious to want to cover the entire life of a man, but they do. At least the dramatic bits of his life. I'm sure there are many things that could have been used.

Downey gives a career defining performance. It's a demanding role with that ranges from pratfalls to tears.

If you step out of the room to check your email, you'll miss seeing the lovely Marisa Tormei.

The film definitely gives a sense of the zany style of comedy prevalent during the silent era. Some of it recreated for this film, some clips from actual films. In one scene in Utah, the characters (Chaplin and his crew) play out a scene as if they were in a silent movie and it's delightful to watch.

There is another aspect of the structure that adds to the film. It's the 1960s. An old Chaplin has written his autobiography and an editor has come to ask him questions, to clarify and add details about his life. These questions and answers serve as exposition and segue ways into the recreation of his life that is the film. As the film progresses, we get brief interludes with Chaplin and the editor. It helps to clarify the significance of moments in the film, exposition, but it works.