onald Colman plays an Englishman who has come to a fictional European country (think Germany or Austria of 100 years ago) to enjoy some time fishing. He's immediately mistaken for the crown prince who looks exactly like him because he plays both roles.

Madelaine Carroll is a princess. While she has a small role in the film, each moment she's on screen is a pleasure because he was beautiful and captivating. 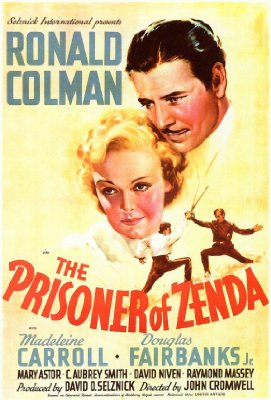 C. Audry Smith plays a grandfatherly-senior advisor to the king. David Niven, in a small role, plays the junior advisor.

Raymond Massey, in an amazing performance, plays the king's older brother. He is a villain to the core. He believes he should be king and not his brother, but they won't let him be king because they had different mothers.

Douglas Fairbanks, Jr. plays an aristocrat aligned with the brother, but plays the role with whim and humour. Quite a contrast.

As for the story. Our hero, the commoner, arrives in the fictional country to go fishing. Immediately people stop and stare because as we learn he looks identical to the crown prince whose coronation is tomorrow.

After his arrival and out in the wilderness, he happens to meet the crown prince and his two advisors. They hit it off because of their identical look and learn they share common ancestors. They are cousins.

Invited back to the lodge, the king-to-be and company drink and eat and toast. Seems the king drinks a bit too much, and, well, the evil brother has spiked his wine with something and he passes out.

Morning comes and the state of affairs is in ruins. The king is not conscious and can't attend his coronation. His brother has drafted documents to take over as reagent. If a king isn't crowned, he'll never be crowned and Michael will win.

Enter the inciting incident. The advisors convince our hero to be the king for the purposes of the coronation. Just one day. He reluctantly agrees. The king is crowned and Michael's plan is foiled until he hatches a new one.

The brother orders the Fairbanks character to kidnap the real king. As a result our hero gets to play king for longer than he bargained. Enter the princess.

I should note, everyone who meets him doesn't suspect a thing.

Our hero and our love interest hit it off and the love story of this film has started. Lots of scenes in Act II are between them, yet, the princess doesn't have a great deal of screen time.

The game of identities can't continue. Our hero wants the princess and will stay on as king to keep her. The brother wants to take over and get rid of the king. The advisors want the true king to be in place. The Fairbanks character wants to gain some wealth and power from the happenings. Something has to give.

The intrigue that develops is quite convoluted and dynamic but ultimately leads to a showdown where our hero goes to the castle to rescue the king and does.

The brother is murdered. The Fairbanks character stabs him with a knife. Guards are killed. Then the big fight. Our hero and Fairbanks in a sword fight. Effective and entertaining until our hero gains the upper hand. Fairbanks jumps out of the window to fight another day. Our hero cuts the rope to allow the draw bridge down and reinforcements to enter. The king is saved and is able to rule as if nothing happened.

The film ends with our hero meeting with the princess. They are madly in love, but she must put that aside for the good of her country. No happy ever after.

The Prisoner of Zenda (1937) is an enjoyable film with lively characters. The quality of it all stands up some seventy plus years after it was made.