...the filmmakers's idea of insight is rather obvious...

ake a run-of-the-mill storyline, chop it up into pieces and show the same event from six different points of view and you have a film called VANTAGE POINT. 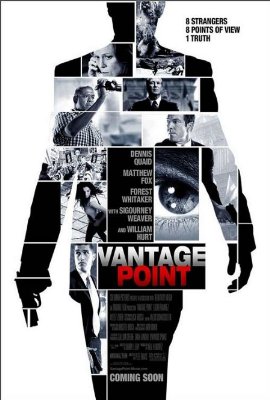 That's my fundamental test for a movie. Would I want to watch it a second time or a third or fourth? In this case, once is enough.

The film takes place in a large city in Spain. World leaders have gathered to sign a treaty to fight terrorism. The big dog on the block is the US president complete with his massive convoy and army of secret service men.

In the seventh minute, POTUS steps to the podium to address the crowd and the world TV audience. Without saying a word, he is shot twice and collapses. Chaos ensues. We hear a distant bomb. A minute later, a bomb under the podium goes off and all hell breaks loose.

Who shot the president? Was he really shot? Will the shooter be caught? If so, how? My immediate answer was "inside job." One of the secret service agents had turned bad.

In thrillers the story line continues until there is a twist. The twist comes in the way of new information we didn't have before (although we may have guessed it in advance). The twists are often the revelation we were duped. We thought A happened, when in fact A never happened, it was B or C. The classic example of this twist is character B, a supporting character to our hero, was seen as a good guy, someone to trust, when in fact he's a mole.

There are two major twists in this story. The person shot wasn't the president, but a double. Second, it was an inside job. One of the secret service agents worked with the terrorists and helped them carry out the plan. It's the most plausible explanation for what happened in the first POV sequence.

How it comes together in the third act is complete Hollywood make-believe. The good guy (played by Barnes) figures it all out and, with little aid, chases after the bad guy. There is a car chase that lasts at least five minutes if not more and is typical no-brainer fair. Once the bad guy is chased down and killed, the president is saved and life goes back to normal.

The first POV sequence is from inside a TV control room covering the event. It works because we're setting up the start of the film and TV reporting is a natural for exposition.

The second POV is our hero--Quaid as a grizzled secret service agent protecting the president. Introduce our hero early in the film. The pat-the-dog scene is a TV clip showing him literally taking a bullet for the president. The inner turmoil is bubbling out with his sweat.

The subsequent sequences show other characters until we finally see how the bad guys pulled it off. Once that's over, it's Act III where they have taken the real president hostage and the chase is on.

The film is fun to a point but not great.