Indiana Jones and the Kingdom of the Crystal Skull (2008)

Indiana Jones and the Kingdom of the Crystal Skull. Feature film. (2008, 122 mins) IMDB

ou've watched the movie, seen the trailers, heard the hype on TV--probably. Since I don't watch TV, I missed it--no great loss.

I read they wanted to make this 4th version for Indiana Jones for some time, but it kept being delayed because George Lucas wouldn't sign off on a script. Many screenplays were written and rejected. I'm more interested in the development of the scripts than the actual movie and I'm writing about other things than the movie, because there isn't much to say about the film. 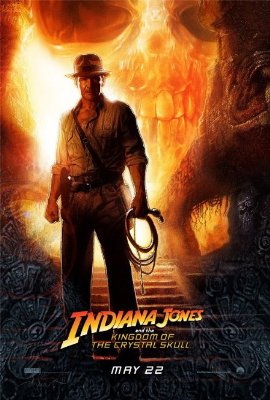 Should I be amazed the budget for this film was $185 million? Wow! That's a lot of money for one film. Is that the cost of getting the film into the can or does it include all the advertising, publicity and prints? Not sure. I'd like to know that as well. Maybe someone at Paramount can send me an anonymous email with some details.

It goes without saying that RAIDERS OF THE LOST ARK is one of the best action adventure movies ever made. It stands up to any movie of its genre. I think one of the reasons it works so well was the fact it was set in an era different from when it was made. The film can't age. Second, the German uniforms always look good on film. Ask any costume designer that question and they'll agree with me.

But I should say something about this film.

I won't say how Indiana Jones triumphs in this movie, other than he survives, because I never understood the story line. It's the most muddled, confusing and odd narrative of any of the Indy movies and it baffles me that this script was accepted. I want to know what they were thinking? At some point someone will explain it to me.

In the first film, the villains were Nazis and the French archaeologist they hired to find the Holy Grail. Someone wrote that the Holy Grail was a MacGuffin--Hitchcock's term for a plot device that drives the story but has no value in and of itself. The Grail did have value and meaning and to label it a MacGuffin is incorrect.

The third reason the first film worked is because all the stunts and action actually happened. No computer effects. The same can be said of the Bond films. This fourth version has a bunch of computer generated effects and every time they pop on screen they are obvious and take away from the film.

Since Harrison Ford has aged (I guess he's in his sixties now), the character has aged. The film is set in the 1950s. His sidekick in this adventure is a cliché--the rebel-without-a-cause type--the black leather jack, slicked back hair, switch-blade knife, motorcycle etc. Couldn't they come up with something original. It was annoying as the rock music of that era. I suspect that is a George Lucas influence on this film. Flashbacks to AMERICAN GRAFFTI.

I was delighted to see the return of Karen Allen. Aging isn't kind to women and it's the reason many don't have careers past forty. In this film, she's just as feisty as in the first film, but more tongue-in-cheek.

One of the coolest action sequences is probably the simplest. Our group of heroes are deep in a Peruvian jungle at the lost City of Gold. They are walking down steps inside a circular tower. It's all made of stone. The steps are slabs of stone that jet out from the wall. At first everything is fine, but then the steps slowly move in toward the wall. They are vanishing and with it a plunge down this column. It was fun to watch.

Finally, one of the trademarks of an action-adventure film is the capture of our hero. It usually marks the end of Act II. Well, it doesn't quite happen that way. He's captured before the film starts in the teaser that is too long and not interesting enough. Did we really need to some teenagers racing a hot rod on a desert road? What did that prove? The characters weren't part of the story--it was completely indulgent. Another Lucas touch for the worst.