...how can a mother transfer her personality and life to her daughter?...

s the film opens we follow a middle-aged husband and wife. They are madly in love. Sugary type of love. They have a sixteen year old daughter who is sarcastic and petulant. It doesn't take long to realize something is going to happen to break up this perfect love nest. That event? The mother drives the family SUV on a highway with the daughter in the passenger seat. In a flash, she jerks the steering wheel to avoid hitting an oncoming vehicle, loses control. The vehicle tumbles down an embankment. 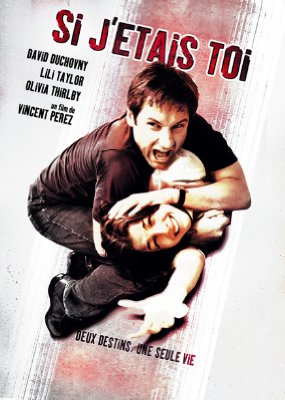 Cut to a hospital scene where mother and daughter are alive but badly injured. When the daughter goes into cardiac arrest, the mother reaches over and grabs her daughter's arm. A moment later the mother dies, but the daughter lives.

The major twist of the story comes shortly after when the daughter wakes up and we discover it's the mother in her daughter's body.

FREAKING FRIDAY used the premise of the mother and daughter switching bodies, but in that film both lived. In this film, the mother dies and is buried, but her personality and spirit live on in her daughter. One plays for comic effect, this film has no comedic moments.

It's not surprising no one believes the daughter because it defies rational explanation, but of course there are events and knowledge only a wife would know about her husband. The daughter behaves differently as well--cooking and cleaning when she did neither before. What follows is an awkward situation. A father who is madly in love with his wife inside the body of his sixteen-year-old daughter. A wife who wants to be close but can't.

The secret is to keep this secret.

The daughter must try to live her life as if she were the daughter--going to school, socializing--in the hopes their daughter will return.

The second act deals with how the father/husband and mother/daughter deal with it. When the daughter returns to school, she's a fish out of water. The father is paralysed between wanting to be the husband and having to be the father.

The story progresses with the arc of the daughter becoming the daughter again. Fitting in at school. Socializing. Planning to go university. Finding a better self in herself.

The mother in her disappears.

There is no explanation for why it happened or how it happened. The transference (if that's the word) is simply a plot device to explore relationships and character interaction that wouldn't exist otherwise. I hate that. Give me a rational explanation beyond the irrational paranormal and supernatural.