remember watching the original 1939 film on which this film is based. Two points obvious points. First the witty batter, lots of great lines, but second, the film had only women in it. I haven't watched a movie before or since where that's true. (If I did, I don't remember). So, knowing that, and knowing this film was a remake, the question I had at the beginning was: are there any men in this movie? 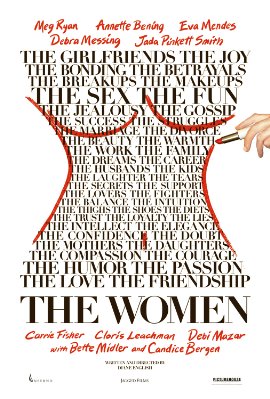 The answer is no and as a result, the story is limited as a result. Odd and awkward at times. It's not a sex issue, it's a storytelling issue. A movie with only woman can work, just not this one.

The story line is simple. It's NYC. There are four middle-aged women who are friends. The lead character is Mary (Meg Ryan). She seems to have a perfect life. Nice house, servants, husband, daughter, activities to keep her busy. Then the bomb shell. Her husband is seeing some other woman played by Eve Mendez. The film spends the rest of its time dealing with how Mary will respond to it.

How she and her friends and mother and daughter respond to it are predictable: Ignore it. Get divorced. Start a new life. Reconciliation. There's nothing fresh or interesting about the situation.

In a way, this film is like a version of Sex and the City without Mr. Big and any of the men.

Yes, there are some funny lines. There would have to be since it's a comedy, but the lines just hang out there. They come across as a stand up comic routine.

But here's the main problem with the film. Because there are no men on screen, things happen on the phone or somewhere else. Meg tells her husband she wants a divorce. They argue etc. It all happens off screen and we hear a recap by the two live-in servants. That zaps the scene of any drama and it's done repeatedly. We don't want to hear about what happened, we want to witness it. Eavesdrop.

The best sequence happened at the end when Edie goes into the labour. It's the type of scene that has been done in film and TV many times, but there's something about the angst of a women in labour that is funny. It's played as a slapstick routine and it works. There was a ghost of Charlie Chaplin.